At 19:18 on July 5, 2022, SUPCON SOLAR Delingha 50MW Molten Salt Tower CSP Plant has generated 755.2MWh of electricity generation in a single day. For 11 months since the completion of the rectification of the steam turbine on August 5,2021, the total power generation of the plant was 146GWh, exceeding the designed annual power generation (146GWh) one month ahead of schedule. It has become the first Molten Salt Tower CSP Plant in China with its annual actual generating capacity fully reaching and exceeding the designed annual generating capacity. 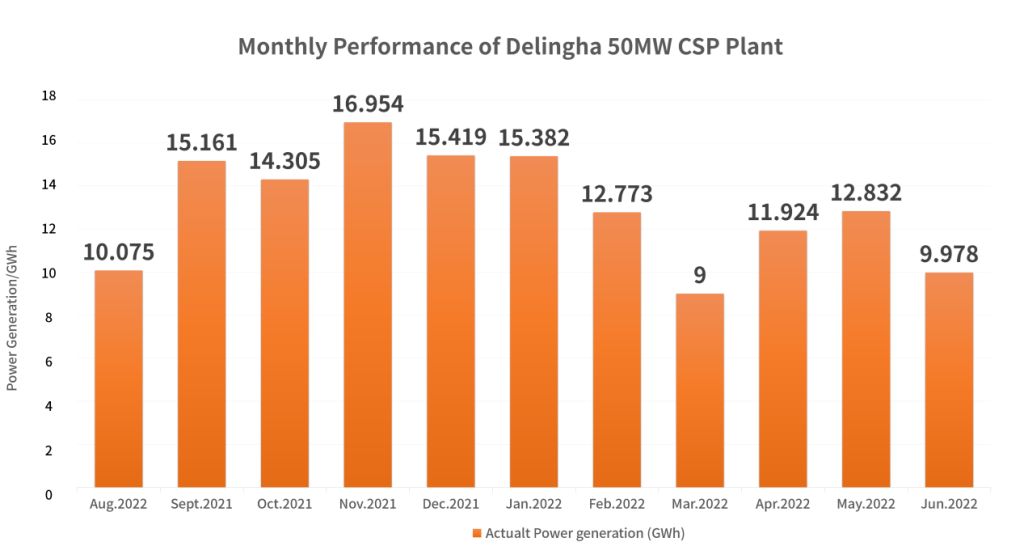 The plant was synchronized to the grid on Dec. 30, 2018. After short trial operation from January to June 2019, the plant reached full-load operation for the first time on April 17, 2019, and passed the tests for technical acceptance of CREEI in Jun 2019. It entered the regular operation stage from July 2019.

During the normal operation, the power plant repeatedly broke the single-day and single-month operation records, despite many problems such as frozen tube of molten salt receiver, excessive vibration of cold salt pump, and turbine returning to the plant for  maintenance three times. However, due to efforts of our team, these problems have been well solved. Since the last start of the steam turbine and main steam pipeline was completed on August 5, 2021, the plant has been running stably for 11 months, and the actual power generation exceeded the designed annual power generation (146GWh) one month ahead of schedule. It became the first Molten Salt Tower CSP Plant in China and even in the world with its annual actual generating capacity fully reaching and exceeding the designed annual generating capacity.

The plant is designed and constructed based on Cosin Solar’s fully patented technologies, and over 95% equipment are domestically sourced. The plant passed complete technical assessment of Fichtner, a German independent engineering consulting company. The design of the plant corresponds to state-of-the-art design known by Fichtner.