An assessment of the cost/benefit of each green heat technology is timely, as countries that were most heavily dependent on Russian gas must rapidly decarbonize heavy industry as gas supplies dwindle from over 40% to under 10% and rise in price from 20 to 140 euros per MWh.

At the plenary of the 2022 SolarPACES Conference, held this year in New Mexico, DLR Institute of Solar Research Director Robert Pitz-Paal told attendees that of the four ways for renewable heat to decarbonize German industry one of the best options to start is concentrated solar thermal (CST).

However, with Germany’s low DNI solar resource of 1000 kWh/m2, central Europe might not seem ideal for this kind of solar energy, which generates heat by concentrating reflected sunlight from mirrors onto solar receivers to generate heat.

“Before people thought in this country it doesn’t make sense, it doesn’t work; there’s not enough sun, and so on, but in many cases it is economically viable and we see projects coming up right now,” he told me afterwards.

“But at these very high gas prices concentrating collectors can replace gas for process heat or heating grids even in Germany and Central European countries. The first commercial projects show that you can do it, even in these countries, at a very attractive cost compared to expensive gas.” 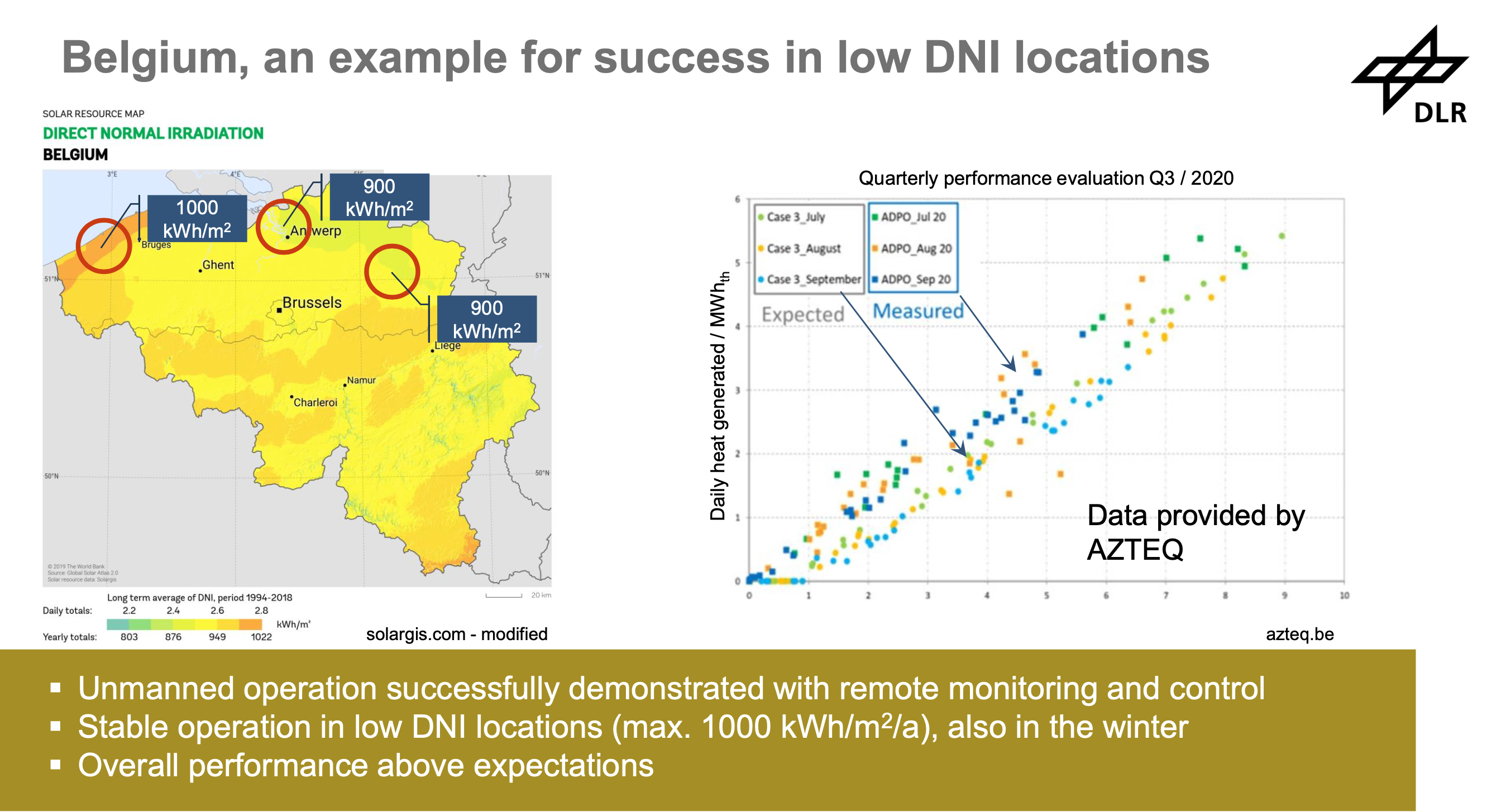 To enable this transition, the German government has offered a 55% subsidy to speed the transition to green heat for industrial processes, bringing payback time for CST down to below 3 years.

In the presentation, Pitz-Paal compared the pros and cons of the four renewable options available to replace combustion of fossil fuels for heat; green hydrogen from electrolysis, concentrated solar thermal, geothermal, and biomass.

The bottom line is that of the four renewable options, CST would have the lowest land use, lowest cost, and most surprisingly for Europe – an adequate solar resource – for temperatures up to 400 °C used by many industries. 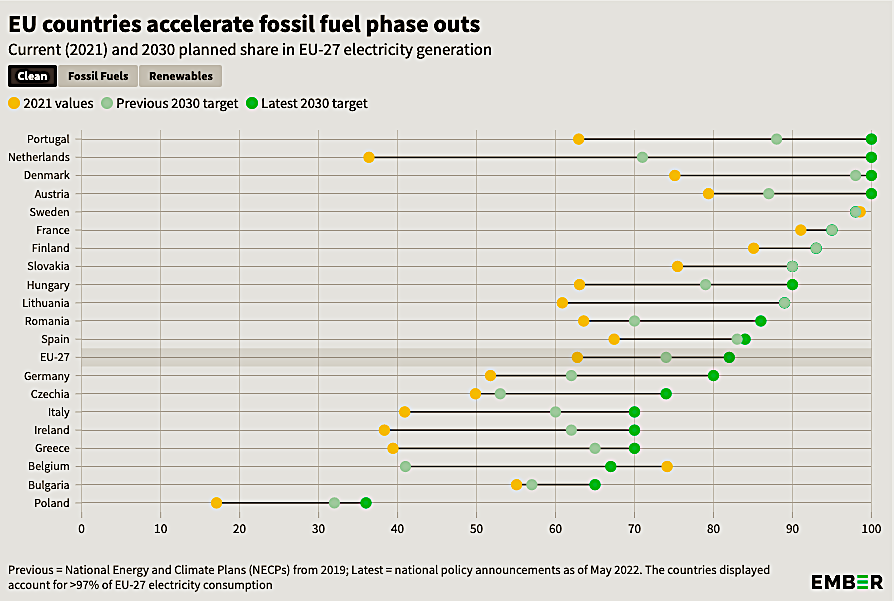 In Europe, PV costs around 6 Euro cents per kWh. PV or wind powered electrolysis for hydrogen for combustion heat would be costlier. “Converting solar electricity to hydrogen and then combusting it is a very expensive way to use it,” he explained.

“The cost of the heat from combusting this hydrogen is significantly more than 15 or 20 Euro cents per kilowatt hour, so it’s not really competitive today to replace gas just to generate process heat.”

Even in Germany, concentrated solar thermal can generate heat at 400 °C round the clock with thermal storage, or can be directed to Combined Heat and Power Plants (CHP) to produce both power and 250 °C heat in an existing system.

“Today, these CHP plants are run with fossil fuel,” he said. “In a CHP plant, you get both; electricity and process team. To run it with concentrated solar thermal is straight forward – you just deliver the heat stored in molten salt to the CHP plant to generate that steam instead of burning gas.”

Not all solar thermal is concentrated. For lower temperatures, flat plate collectors or evacuated tube collectors are well understood to help generate hot water for homes for example. But for the kind of reliable round the clock heat needed by industry; the concentrated form can more consistently supply even lower temperature heat with thermal energy storage.

Geothermal could supply round the clock heat either directly or by delivery to a CHP unit for both heat and power. But finding the perfect spot to hit the geothermal resource underground is hit or miss. This uncertainty means a high risk for lenders, which raises cost, he noted.

“We have experienced the situation in Germany that drilling a some kilometer deep hole does not find the expected heat source of 200°C to 300°C. So the investment of time and energy in searching is lost.”

Biomass, while able to generate heat from combustion at over 1000 °C for the high temperature needs of steel or cement, has land use limitations. What is actually used by industry is biogas, but there is not enough available to meet the needs of industrial processes. 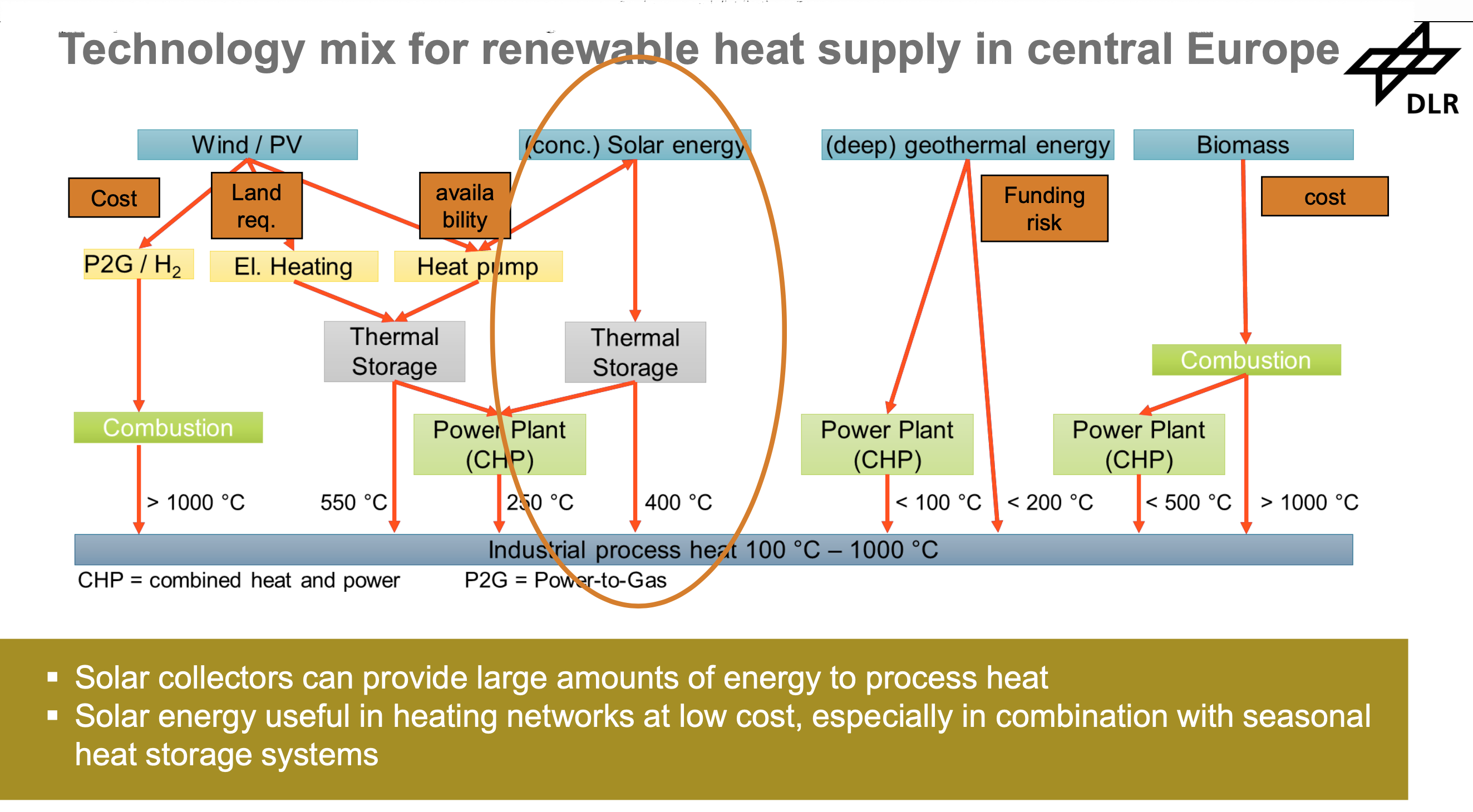 An obstacle is that ignorance of all the options for renewable heat is quite common within the kinds of industries that need renewable heat, he said: “Industry is most familiar with gas, oil and coal. An obvious alternative to them is PV solar electricity and to then use electrical heaters. However, three times more land is required by PV than CST to produce the same amount of heat, so producing heat with PV costs more than with CST.”

Companies that supply solar heat have been springing up, and regulators who understand the advantage of solar heat created a 55% subsidy in Germany that reduces payback time to below 3 years. However, take-up of concentrated solar thermal for industrial heat is still slow as there is little awareness of the technology in Germany.

“Even if an off taker company has heard about this option, many engineering companies don’t know the technology and therefore do not recommend it,” Pitz-Paal explained.

“We need to educate people to properly do the design and really develop the expertise in this field. We need people that know how to do it and we need to see more reference projects in Germany. Public research labs like DLR can support this, for example, by providing simulation tools so that the engineering companies are able to actually do a proper analysis and design and help to monitor the performance in operation to ensure that such projects become a technical success.”