The Cerro Dominador project has successfully carried out the molten salt pumping tests towards the receiver, being one of the latest milestones of this project that prepares its interconnection to the National Electric System, since it is the prelude to the synchronization of the plant, where the molten salt storage system makes it possible for the plant to generate energy 24/7. 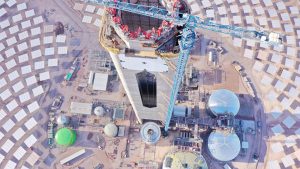 Over the next few weeks, the system will be synchronized, which begins phase 1. “Then we will go to Phase 2, which is Operation, where we will be making a detailed adjustment of the different systems and we will carry out the final acceptance tests of the plant”.

“During this period we expect to operate at an average of 50% of nominal power. At the end of phase 2 we will reach 80% of the nominal operation ”, it was reported from the project belonging to Global Energy Partners.

“Then Phase 3 will come, which will be necessary for the complete coupling of the plant to the operating mode of the national electricity system. That is, at this point it adapts to the requirements of the National Electrical Coordinator, operating at an average of 80% of maximum power. Finally, Phase 4, or definitive phase of commercial operation, is when the plant will operate at its maximum capacity ”, it was indicated.